Deprecated: mysql_connect(): The mysql extension is deprecated and will be removed in the future: use mysqli or PDO instead in /storage/content/94/2011594/stockholm360.net/public_html/db_connect.php on line 8 Ancient City Bishapur panorama / virtual tour gallery

Gallery: Ancient City Bishapur
Deprecated: mysql_connect(): The mysql extension is deprecated and will be removed in the future: use mysqli or PDO instead in /storage/content/94/2011594/stockholm360.net/public_html/db_connect.php on line 8

Bishapur, "the beautiful [city] of Shapur", as the name indicates was founded by king Shapur (241-272 AC). Like the bridge at Shushtar, it was built by Roman soldiers who had been captured after the defeat of the Roman emperor Valerian in 260. Many aspects of Bishapur's architecture look Roman e.g. the "Hippodamian street plan" (or the grid plan). The core of the city is the old castle, situated in a steep rock. The oldest monument was relief I in the Tang-e Chowgan gorge. Reliefs II and III commemorate the defeat of Valerian. While these were cut, the city, palace, and the so-called Temple of Anahita were built by the Roman prisoners of war. Later monuments include reliefs V, IV, and VI.

The city, surrounded by walls that stood ten meters high, was inhabited by some 50,000 to 80,000 people. The main monuments have been excavated between 1935 and 1941. Most of the city is still buried. 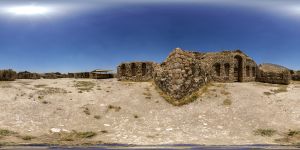 The palace of Bishapur, a cross-shaped central room and several smaller halls adjacent to it. the building consisted of four half vaults (iwans) and an open square in the middle, the same building type as the "four iwan mosque", which was designed in the Middle Ages. There are sixty-four niches, which were apparently decorated with statues. Mosaics have been found in several rooms and in several places, stucco decorations were found.

To the west and east of the central, cross-shaped hall, are the rooms that are known as the western and eastern mosaic halls. To the north was the mysterious building that is commonly known as the "temple of Anahita". See arial photos and mosaics found in Bishapur HERE! 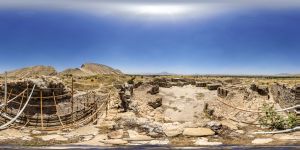 The Palace complex of Bishapur from the top of one of its four iwans. According to an inscription, the city itself was founded in 266 by Shapur I (241-272), who was the second Sassanid king and inflicted a triple defeat on the Romans, having killed Gordian III, captured Valerian and forced Philip the Arab to surrender. In his native province of Fars, he built a new city that would measure up to his ambitions: Bishapur, Shapur's City. Outside the city, Shapur decorated the sides of the Bishapur River gorge with huge historical reliefs commemorating his triple triumph over Rome. 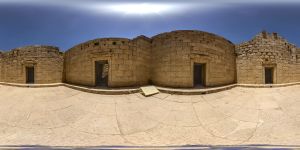 The building that is known as the Temple of Anahita, is in fact an unidentified structure, deeper than the other rooms of the palace. The structure, with its pleasant, harmonious dimensions, can only be reached by descending a long stairs. The water conduit in the shrine of Anahita. It is a building without parallel. Once you've descended the stairs, you will find yourself on a small square, surrounded by high walls. The square must have been a pool, surrounded by sidewalks. The doors in the walls give access to a corridor that surrounded the square, and which in turn gave access to the place where the aqueduct reached this square building. 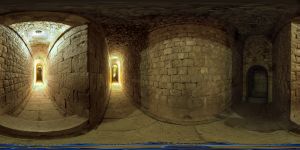 The corridors around the square courtyard of the structure, the sÃ¥ called Temple of Anahita. The square must have been a pool, surrounded by sidewalks. The doors in the walls give access to a corridor that surrounded the square, and which in turn gave access to the place where the aqueduct reached this square building. 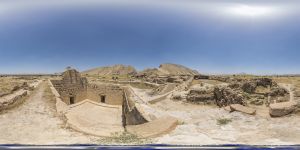 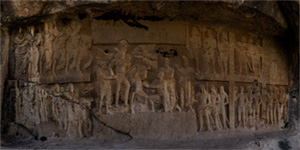 In this rock relief monument, we see a triumphant king, adored by his subjects. In 244 AD, the Roman emperor Gordian III had been killed under or in connection with the war with the Persians, and his successor Philippus Arabs concludes a peace treaty with Shapur I and pays an enormous indemnity to the Persians to withdraw the army from a potentially disastrous situation. He owed his throne to King Shapur. Indeed, he was recognized as emperor by Shapur and the Senate. On this relief, we can see the dead Gordian underneath the victor's horse in the center of the scene. In front of the horse, we see Philip, kneeling and begging to be spared.

However, in 260, the same Sassanian king defeated another Roman emperor, Valerian, and had even taken him captive. Here, we see how the king has seized the captured emperor Valerian by the hand. (Zoom in to see the details!). 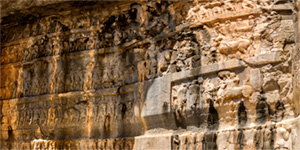 The third relief at Bishapur's Tang-e Chowgan has five horizontal registers. Like reliefs one and two, it was made by the Sasanian king Shapur I (241-272). In the center, we see Shapur's triple victory, which was also the theme of the second relief at Bishapur, and is depicted in Naqhsh-e Rostam too.

Underneath the king's horse, we see the Roman emperor Gordian III, who was killed in 244; elsewhere, we recognize Philippus Arabs, who was made emperor by Shapur; and to the left, we see the captured Valerian. These figures are very damaged, but it is obvious that the design is a copy of the relief at Naghsh-e Rostam. 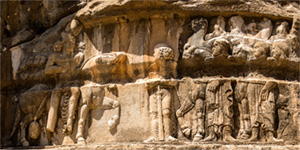 The fourth Sasanian rock relief at Bishapur -chronologically, the fifth- was made for king Bahram II (276-294) and shows how he receives a delegation of Arabs. The course of the old aqueduct, which has damaged three of the reliefs on this side of the river, is clearly visible.

The Arabs are recognizable on this relief because they are accompanied by a dromedary. King Bahram II can be recognized by looking at his winged crown. 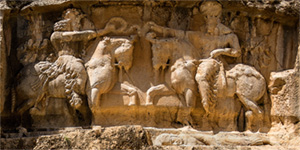 The fifth Sasanian rock relief at Bishapur -chronologically, the fourth- is a classical representation of an investiture, this time of king Bahram I (273-296). There is a close parallel to the relief of the Investiture of Ardashir I at Naghsh-e Rostam and of Shapur I at Naghsh-e Rajab.

The scene is typical. From the left, the supreme god Ahuramazda approaches the king and gives him the ring of power, the cydaris. There is a diadem tied to it. To the right, we see Bahram accepting the cydaris. Bahram is represented as a conqueror, with a defeated enemy underneath his horse. Like two other monuments on the north bank of the Tang-e Chowgan, the fifth relief is also damaged by the aqueduct that used to be there. It was removed in the 1970s. 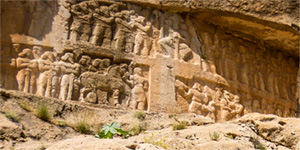 The sixth and youngest Sasanian rock relief in the Tang-e Chowgan gorge, Bishapur was made for the Sasanian king Shapur II (309-379) and shows the suppression of a revolt.

The relief has two registers. The king is sitting on his throne in the center of the upper register, his hand on his sword. From the right, soldiers come closer. They bring prisoners, among which Iranian noblemen can be recognized. In the lowe register, someone is offering the head of a decapitated enemy. There's also an elephant, which suggests that Shapur's victory was won in one of the eastern parts of the Sasanian Empire. 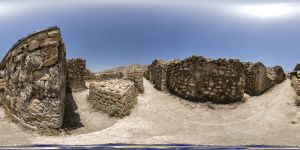 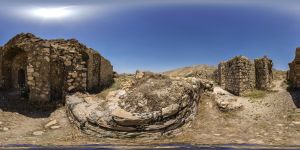 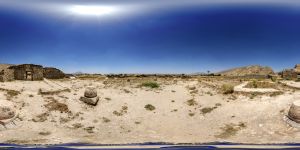 According to an script and the style of the architecture this building has been recognized as mosque from the time after Persia's invation of muslim arabs.