Deprecated: mysql_connect(): The mysql extension is deprecated and will be removed in the future: use mysqli or PDO instead in /storage/content/94/2011594/stockholm360.net/public_html/db_connect.php on line 8 Chichen Itza panorama / virtual tour gallery

Gallery: Chichen Itza
Deprecated: mysql_connect(): The mysql extension is deprecated and will be removed in the future: use mysqli or PDO instead in /storage/content/94/2011594/stockholm360.net/public_html/db_connect.php on line 8

Currently 7 Panoramas in This Gallery

Chichen Itza, the archaeological site, a UNESCO World Heritage Site, located in Yucatán State, Mexico was a large pre-Columbian city built by the Maya people of the Terminal Classic period.

Chichen Itza was one of the largest Maya cities and is one of the most visited archaeological sites in Mexico; an estimated 1.4 million tourists visit the ruins every year. Chichen Itza's El Castillo has been named one of the New Seven Wonders of the World. 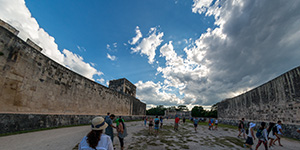 The Great Ball Court of Chichen Itza is by far the most impressive and the largest and best preserved ball court in ancient Mesoamerica. It measures 168 by 70 metres (551 by 230 ft). The parallel platforms flanking the main playing area are each 95 metres (312 ft) long. The walls of these platforms stand 8 metres (26 ft) high; set high up in the centre of each of these walls are rings carved with intertwined feathered serpents.[ 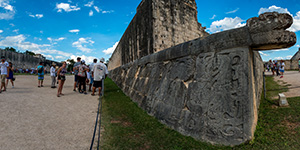 The Great Ball Court is about 150 metres (490 ft) to the north-west of the Castillo in Chichen Itza.
At the base of the high interior walls are slanted benches with sculpted panels of teams of ball players. In one panel, one of the players has been decapitated; the wound emits streams of blood in the form of wriggling snakes. 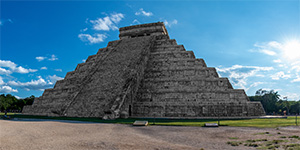 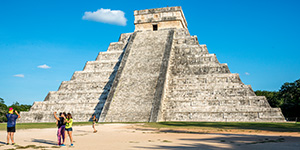 Dominating the North Platform of Chichen Itza is the Temple of Kukulkan (a Maya feathered serpent deity), usually referred to as El Castillo ("the castle"). This step pyramid stands about 30 metres (98 ft) high and consists of a series of nine square terraces, each approximately 2.57 metres (8.4 ft) high, with a 6-metre (20 ft) high temple upon the summit.During the spring and autumn equinoxes, the late afternoon sun strikes off the northwest corner of the pyramid and casts a series of triangular shadows against the northwest balustrade, creating the illusion of a feathered serpent "crawling" down the pyramid. 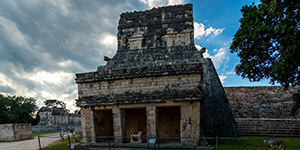 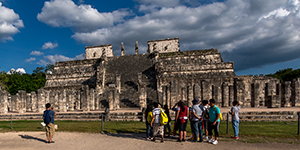 The Temple of the Warriors complex consists of a large stepped pyramid fronted and flanked by rows of carved columns depicting warriors.
Along the south wall of the Temple of Warriors are a series of columns. The columns are in three distinct sections: A west group, a north group and a northeast group.
To the south of the Group of a Thousand Columns is a group of three, smaller, interconnected buildings. 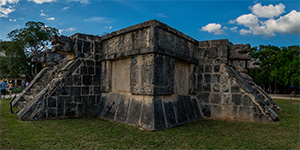 This Platform of Venus is dedicated to the planet Venus. In its interior archaeologists discovered a collection of large cones carved out of stone, the purpose of which is unknown. This platform is located north of El Castillo, between it and the Cenote Sagrado in Chichen Itza.