Deprecated: mysql_connect(): The mysql extension is deprecated and will be removed in the future: use mysqli or PDO instead in /storage/content/94/2011594/stockholm360.net/public_html/db_connect.php on line 8 Göteborg (Gothenburg) panorama / virtual tour gallery

Gallery: Göteborg (Gothenburg)
Deprecated: mysql_connect(): The mysql extension is deprecated and will be removed in the future: use mysqli or PDO instead in /storage/content/94/2011594/stockholm360.net/public_html/db_connect.php on line 8

Currently 17 Panoramas in This Gallery

Sweden's second largest city situated on the west coast of Sweden. The City of Gothenburg was founded in 1621 by King Gustavus Adolphus. The city was heavily influenced by the Dutch and Dutch city planners were contracted to build the city as they had the skills needed to build in the marshy areas around the city. The town was designed like Dutch cities such as Amsterdam. The plan of the streets and canals of Gothenburg closely resembles that of Jakarta, which was built by the Dutch around the same time. It is the largest seaport in the Nordic countries.The home town of Volvo, SKF ball bearings, and Hasselblad cameras. Traditionally Gothenburg is an industrial city and the sea, trade and industrial history of the city is evident in the cultural life of Gothenburg. 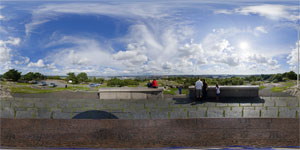 The view of Gothenburg (Göteborg) Sweden from atop Ramberget. This is from a viewpoint, from which you can see most landmarks of the town. There is a huge stone map with directions to the landmarks carved into it just under the camera (navigate downwards to see it). This is actually a public park situatd on a hill where people go for a walk with beautiful views. 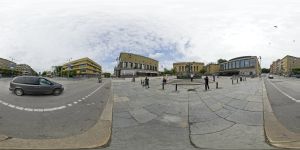 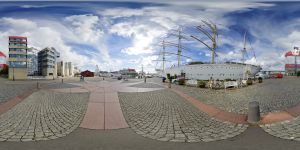 Lilla Bommen is a marina in the Goteborg's city centre. The ship Barken Viking seen here is just at the pier and the Skyscraper Skanska with the its typical red/white colour nicknamed the lipstick.

In 2010 a 60m high ferris wheel named Goteborgshjulet (The Goteborg Wheel) was installed at the place, also seen in the panorama. The Ferris wheel was moved from here to the amusement park Liseberg in spring 2012. 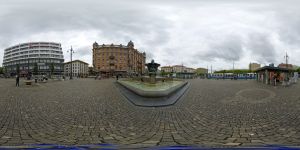 Järntorget is a public square in Gothenburg, Sweden. Järntorgsbrunnen or the five world contents is an sculpture in Järntorget i Göteborg (Gothenburg). The sculpture consists of a fountain in granite with associated wells cut in cast iron. Around the well is located five naked girls in bronze symbolizing the five continents and a ship in the middle at the highest point of the sculpture sailing to the five continents reminding about the city's traditions. 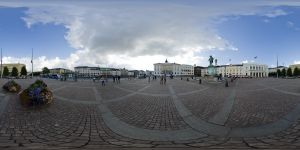 Gustaf Adolf's square is a located in central Gothenburg, Sweden. It was named Stortorget (the Big square) until 1854 when a statue was raised over the founding father of Gothenburg, king Gustavus Adolphus of Sweden (Gustav Adolf). Surrounding the square you can find Gothenburg City Hall (the former stock exchange building), the law court (by Gunnar Asplund), and the main canal of Gothenburg. 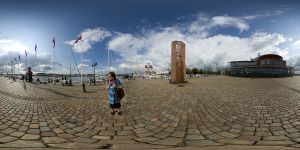 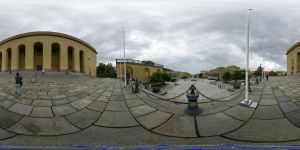 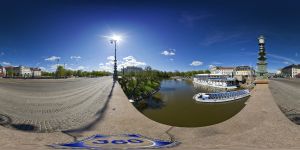 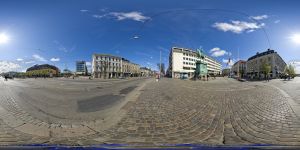 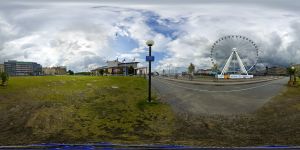 Liseberg wheel (formerly Gothenburg Wheel) is a Ferris wheel in Gothenburg, which opened the first time May 22, 2010. The wheel was originally called Gothenburg Wheel and stood first at Kanaltorget between the Opera House and the shopping center "Nordstan", at the northern end of Kungsportsavenyn / Östra hamngatan (the position you see in this panorama), but was moved in spring 2012 to Liseberg and will then have the new name Liseberg wheel. The wheel is 60 feet in diameter and has 42 gondolas. Total wheel weighs 275 tons. 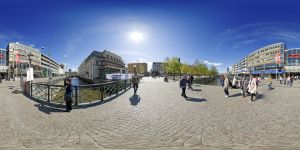 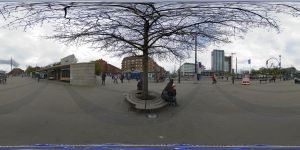 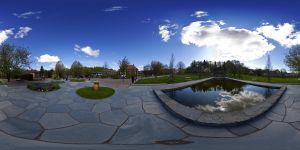 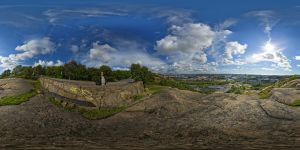 The view of Gothenburg (Göteborg) Sweden from atop Ramberget. This is from a viewpoint, from which you can see most landmarks of the town. This is actually a park on a hill where many people go for walking and having a great view over the city. 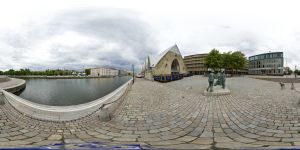 Feskekôrka (Swedish: Fiskkyrkan (normalized), English: Fish church) is an indoor fish market in Gothenburg, Sweden, which got its name from the building's resemblance to a Gothic church. It opened 1 November 1874 and was drawn by the city architect Victor von Gegerfelt. Feskekôrka is an institution in Gothenburg as well as a tourist magnet, housing one of the city's oldest trades, fishing.

Apart from a fish market, there is also a fish- and seafood restaurant in the building. 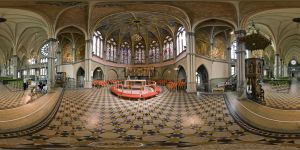 This is a large church in red brick, which originally had 1685 seats. Church's plan differs from the traditional form, in that the tower got its place alongside of the choir. The church has since restored three times the building: 1915, 1940 and 1974. The interior is uniform in the leafy greenish colors. The tower is sixty meters high, built in the angle between the nave and north transept arm. 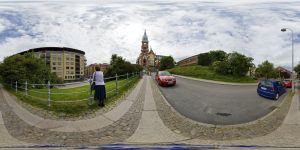 Oscar Fredrik Church is a church in Gothenburg, Sweden. The style is Neo Gothic, but the influence is not the Nordic gothic style but rather the style one can find in the large cathedrals down in continental Europe. The church is built on the Dahlinska hill. The church and the parish got its name from king Oscar II (Oscar Fredrik being his full name).