Deprecated: mysql_connect(): The mysql extension is deprecated and will be removed in the future: use mysqli or PDO instead in /storage/content/94/2011594/stockholm360.net/public_html/db_connect.php on line 8 Naghsh-e Rostam panorama / virtual tour gallery

Gallery: Naghsh-e Rostam
Deprecated: mysql_connect(): The mysql extension is deprecated and will be removed in the future: use mysqli or PDO instead in /storage/content/94/2011594/stockholm360.net/public_html/db_connect.php on line 8

Currently 7 Panoramas in This Gallery

Naqsh-e Rostam, is situated a few kilometers northwest of Persepolis, the capital of the ancient Achaemenid empire. As is shown by a pre-Achaemenid relief and several old graves, Naqsh-e Rostam was already a place of some importance when king Darius I the Great (522-486 BC) ordered his monumental tomb to be carved into the cliff. Later, similar royal rock tombs were added. they belong to Darius' son and successor Xerxes (486-465), his son Artaxerxes I Makrocheir (465-424) and his grandson Darius II Nothus (423-404). Archaeologists are almost certain that the tombs were closed after the burial. After Alexander the Great had overthrown the Achaemenid empire, the doors were smashed and the tombs were looted.

After the fall of the Achaemenid empire, NaqÅ¡-i Rustam remained important to the Persians. After 260 CE, the Sasanian king Shapur I had a monumental relief cut out in the rock, showing how he made Philippus Arabs ruler of the Roman empire and received the defeated Roman emperor Valerian. Other reliefs were added by Shapur's successors. 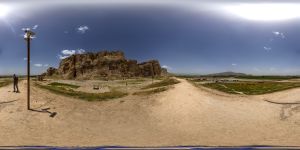 Four tombs belonging to Achaemenid kings are carved out of the rock face. They are all at a considerable height above the ground. In front of the tombs is a small tower, which is known as the Ka'bah-i Zardusht ("Zarathustra's ka'bah" - the real ka'bah being the famous monument in Mecca). Probably, this tower was used to keep the holy fire or books (e.g., the Avesta). 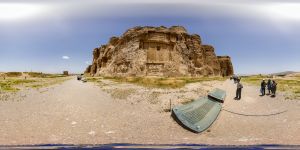 Darius I the Great tomb is the 1st one built here & well-known for the king's "autobiography", which is contained in two inscriptions.
To the left, the most famous Sassanian rock relief from Naqsh-e Rostam, the triumph of Shapur I. Showing how king Shapur has defeated two Roman emperors. In 244, the Roman emperor Gordian III with the Roman legions invaded Mesopotamia & besieged the Sasanian capital Ctesiphon, the war lasted long & Gordian was killed during the campaign & replaced by Philippus Arabs, who makes a peace truce with Shapur. Here emperor Philip kneeling in front of the king's horse. The standing man, seized by the hand by Shapur, is the Roman emperor Valerian, who was defeated & taken captive in another war in 260. A more elaborate version of this monument, also showing a dead Gordian, can be seen at Bishapur (Bishapur Gallery, relief II).
Immediately below the tomb of Darius the Great, the double equestrian victory reliefs of Bahram II. 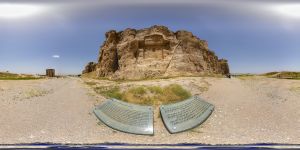 The equestrian victory of Hormizd II (303-309) is immediately below Achaemenid tomb II (Artaxerxes?) and a vanished relief of Shapur II. It shows how king Hormizd unhorses an enemy, who may be identified with king Papak of Armenia, or perhaps one of the kings of the Kushans in the far east. 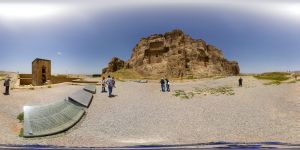 In front of the tombs is a small tower, known as the Ka'bah-e Zardusht, built during Achaemenid period. Mortar was not used in its construction and the limestone blocks are held in place by iron cramps. Probably, this tower was used to keep the holy fire or books (e.g., the Avesta). There was a garden near the tombs and tower.

In front of the Achaemenid tombs, there must have been a park (paradeisos). One of the Persepolis fortification tablets mentions that trees are to be planted at Nupistash, which seems to be Naqsh-e Rostam. 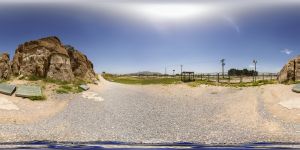 The Left relief: The Investiture Relief of the Sasanian king Ardashir I (224-241). From right Ahuramazda, who is handing over a ring to Ardashir, on the left. Both figures can be identified by their crowns. This ring, which is usually called cydaris, is the symbol of power. Both men are seated on horses and crush defeated enemies: Artabanus under Ardashir's horse and Ahriman under Ahuramazda's.

The right relief: Audience Relief of Bahram II. Bahram's hands rest on his giant sword, showing that he is the man in charge of the kingdom. From the right, three imperial grandees show their devotion to the king. On the left, three people with diademslook at Bahram. 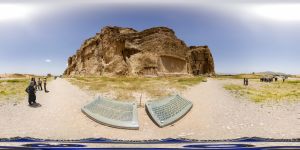 The Investiture of king Narseh (293-303). The king, the second large figure from the right, receives the cydaris ring from a female figure. A young prince is standing between them; to the left are imperial grandees.

Next to this relief is another huge rock relief that has never been fished. Further away to the right one of the cross shaped Achaemenid tombs. 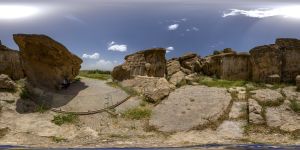 The oldest relief in the middle is the Investiture of Ardashir I. Made by king Ardashir I (224-241), the founder of the Sasanian empire shows, to the right, the supreme god Ahuramazda (or, as he was called back then, Hormuzd), who hands over a ring to Ardashir, on the left.
The relief to the left is the Equestrian Relief of Shapur I. He is shown on horseback. Behind him are nine people. There is a trilingual inscription in front of his horse, which says:
This is a figure of the Mazda-worshipping demigod, lord Shapur, the king of kings in Iran and abroad, who received his face from God, son of the Mazda-worshipping demigod, lord Ardashir, the king of kings who received his face from God, and the grandson of lord Papak, the king.
To the right Investiture Relief of Shapur I.