Deprecated: mysql_connect(): The mysql extension is deprecated and will be removed in the future: use mysqli or PDO instead in /storage/content/94/2011594/stockholm360.net/public_html/db_connect.php on line 8 Rome panorama / virtual tour gallery

Gallery: Rome
Deprecated: mysql_connect(): The mysql extension is deprecated and will be removed in the future: use mysqli or PDO instead in /storage/content/94/2011594/stockholm360.net/public_html/db_connect.php on line 8

Currently 17 Panoramas in This Gallery

Rome is the capital city of Italy. Vatican City (the smallest country in the world) is an independent country inside the city boundaries of Rome, the only existing example of a country within a city.
Rome's history spans 28 centuries. Roman mythology dates the founding of Rome at around 753 BC. Eventually, the city successively became the capital of the Roman Kingdom, the Roman Republic and the Roman Empire, and is regarded by many as the first ever Imperial City and metropolis. After the fall of the Empire in the west, which marked the beginning of the Middle Ages, Rome slowly fell under the political control of the Papacy, and in the 8th century it became the capital of the Papal States, which lasted until 1870. Beginning with the Renaissance, almost all popes since Nicholas V (1447-1455) pursued a coherent architectural and urban programme over four hundred years, aimed at making the city the artistic and cultural centre of the world. In this way, Rome became first one of the major centres of the Italian Renaissance, and then the birthplace of both the Baroque style and Neoclassicism. 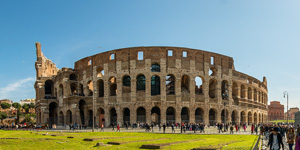 The Colosseum or Coliseum, also known as the Flavian Amphitheatre or Colosseo, is an oval amphitheatre in the centre of the city of Rome, Italy. Built of travertine limestone, tuff (volcanic rock), and brick-faced concrete, it was the largest amphitheatre ever built at the time and held 50,000 to 80,000 spectators. Construction began AD 72 and was completed in AD 80. Further modifications were made (81–96). it was used for gladiatorial contests and public spectacles such as mock sea battles, animal hunts, executions, re-enactments of famous battles, and dramas based on Classical mythology. Also seen in this panorama: Arch of Constantine the Great. 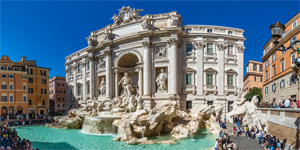 The Trevi Fountain (Italian: Fontana di Trevi) is a fountain in the Trevi district in Rome, Italy, designed by Italian architect Nicola Salvi and completed by Giuseppe Pannini and several others. Standing 26.3 metres (86 ft) high and 49.15 metres (161.3 ft) wide, it is the largest Baroque fountain in the city and one of the most famous fountains in the world. The fountain has appeared in several notable films, including Roman Holiday, Federico Fellini's La Dolce Vita, the eponymous Three Coins in the Fountain, The Lizzie McGuire Movie, and Sabrina Goes to Rome. 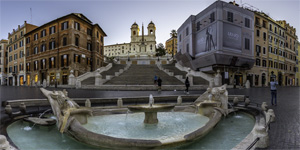 The Spanish Steps are a set of steps in Rome, Italy, climbing a steep slope between the Piazza di Spagna at the base and Piazza Trinità dei Monti, dominated by the Trinità dei Monti church at the top. The monumental stairway of 135 steps was built in 1723–1725, linking the Trinità dei Monti church that was under the patronage of the Bourbon kings of France – located above – and the Bourbon Spanish Embassy to the Holy See – located below – in Palazzo Monaldeschi. In the Piazza di Spagna at the base is the Early Baroque fountain called Fontana della Barcaccia ("Fountain of the longboat" or "Barcaccia Fountain"), built in 1627–29. 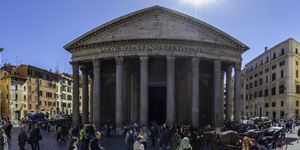 The Piazza della Rotonda is a piazza (city square) in Rome, Italy, on the south side of which is located the Pantheon. The Pantheon is a former Roman temple, now a Catholic church, in Rome, Italy, on the site of an earlier temple commissioned by Marcus Agrippa during the reign of Augustus (27 BC – 14 AD). It was completed by the emperor Hadrian and probably dedicated about 126 AD. The building is cylindrical with a portico of large granite Corinthian columns (eight in the first rank and two groups of four behind) under a pediment. 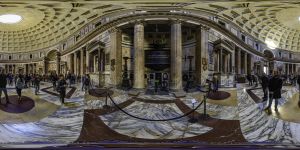 Almost two thousand years after it was built, the Pantheon's dome is still the world's largest unreinforced concrete dome. The height to the oculus and the diameter of the interior circle are the same, 43 metres (142 ft). It is one of the best-preserved of all Ancient Roman buildings, in large part because it has been in continuous use throughout its history and, since the 7th century, the Pantheon has been in use as a church dedicated to "St. Mary and the Martyrs". The Pantheon's large circular domed cella, with a conventional temple portico front, became a standard exemplar when classical styles were revived, and has been copied many times by later architects. 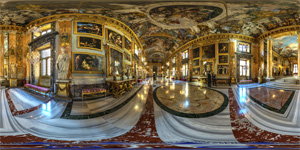 The Palazzo Colonna is a palatial block of buildings in central Rome, Italy, at the base of the Quirinal Hill, and adjacent to the church of Santi Apostoli. It has belonged to the prominent Colonna family for over twenty generations. The first part of the palace dates from the 13th century, and tradition holds that the building hosted Dante during his visit to Rome. The first documentary mention notes that the property hosted Cardinals Giovanni and Giacomo Colonna in the 13th century. It was also home to Cardinal Oddone Colonna before he ascended to the papacy as Pope Martin V in 1417. 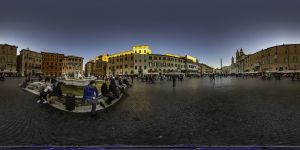 Piazza Navona is a public space/plaza in Rome, Italy. It is built on the site of the Stadium of Domitian, built in the 1st century AD, and follows the form of the open space of the stadium. The ancient Romans went there to watch the agones ("games"), and hence it was known as "Circus Agonalis" ("competition arena"). It is believed that over time the name changed to in avone to navone and eventually to navona. It features important sculptural creations: in the center stands the famous Fontana dei Quattro Fiumi or Fountain of the Four Rivers (1651), topped by the Obelisk of Domitian, brought in pieces from the Circus of Maxentius; the church of Sant'Agnese in Agone, and the Pamphili palace. 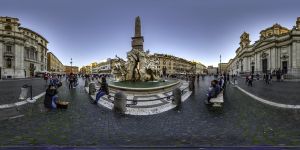 Fontana dei Quattro Fiumi (Fountain of the Four Rivers) is a fountain in the Piazza Navona in Rome, Italy. It was designed in 1651 by Gian Lorenzo Bernini.
The base of the fountain is a basin from the centre of which travertine rocks rise to support four river gods and above them, a copy of an Egyptian obelisk surmounted with the Pamphili family emblem of a dove with an olive twig. Collectively, they represent four major rivers of the four continents through which papal authority had spread: the Nile representing Africa, the Danube representing Europe, the Ganges representing Asia, and the Rio de la Plata representing the Americas. 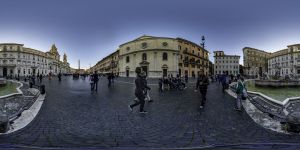 Fontana del Moro (Moor Fountain) is a fountain located at the southern end of the Piazza Navona in Rome, Italy. It represents a Moor, or African (perhaps originally meant to be Neptune), standing in a conch shell, wrestling with a dolphin, surrounded by four Tritons. It is placed in a basin of rose-colored marble. The fountain was originally designed by Giacomo della Porta in 1575 with the dolphin and four Tritons. In 1653, the statue of the Moor, by Gian Lorenzo Bernini, was added. In 1874, during a restoration of the fountain, the original statues were moved to the Galleria Borghese and replaced with copies. 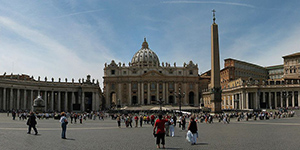 St. Peter's Square is a large plaza located directly in front of St. Peter's Basilica in the Vatican City, the papal enclave inside Rome, directly west of the neighbourhood or rione of Borgo. Both the square and the basilica are named after Saint Peter, an apostle of Jesus considered by Catholics to be the first Pope. At the centre of the square is an ancient Egyptian obelisk, erected at the current site in 1586. 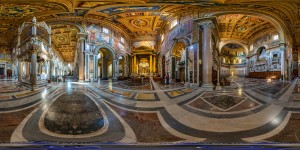 The Cathedral of the Most Holy Savior and of Saints John the Baptist and the Evangelist in the Lateran, also known as the Papal Archbasilica of Saint John [in] Lateran, Saint John Lateran, or the Lateran Basilica, is the cathedral church of the Diocese of Rome in the city of Rome, and serves as the seat of the Roman Pontiff. is the oldest and highest ranking of the four papal major basilicas, holding the unique title of "archbasilica". It is the oldest public church in the city of Rome, and the oldest basilica of the Western world. 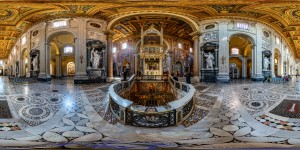 St. John Lateran, also called the Lateran Basilica, is the cathedral of the Bishop of Rome, the Pope. The inscription indicates, with its full title, that the archbasilica was originally dedicated to Christ the Savior and, centuries later, co-dedicated to Saint John the Baptist and Saint John the Evangelist. As the Cathedral of the Pope as Bishop of Rome, it ranks superior to all other churches of the Roman Catholic Church, including Saint Peter's Basilica. 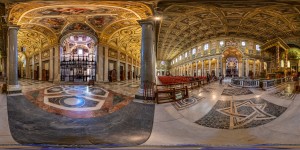 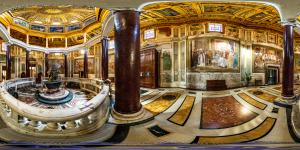 The domed octagonal Lateran Baptistery stands somewhat apart from the Archbasilica of Saint John Lateran, Rome, to which it has become joined by later construction. This baptistery was founded by Pope Sixtus III in 440. This baptistry was for many generations the only baptistery in Rome, and its octagonal structure, centered upon the large octagonal basin for full immersions, provided a model for others throughout Italy, and even an iconic motif of illuminated manuscripts, "The fountain of Life". 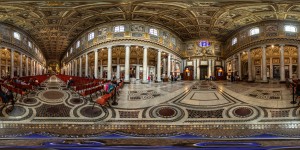 The Basilica of Saint Mary Major (Basilica di Santa Maria Maggiore), or church of Santa Maria Maggiore, is a Papal major basilica and the largest Catholic Marian church in Rome, Italy. The basilica enshrines the venerated image of Salus Populi Romani, depicting the Blessed Virgin Mary as the help and protectress of the Roman people. 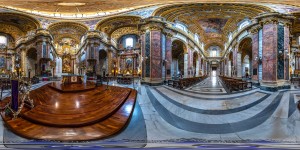 The Basilica of Saint Mary Major, Pursuant to the Lateran Treaty of 1929 between the Holy See and Italy, the Basilica is within Italian territory and not the territory of the Vatican City State. However, the Holy See fully owns the Basilica, and Italy is legally obligated to recognize its full ownership thereof and to concede to it "the immunity granted by International Law to the headquarters of the diplomatic agents of foreign States." 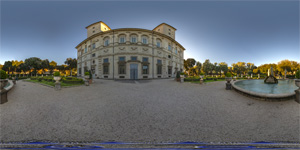 The Galleria Borghese (English: Borghese Gallery) is an art gallery in Rome, Italy, housed in the former Villa Borghese Pinciana. At the outset, the gallery building was integrated with its gardens, but nowadays the Villa Borghese gardens are considered a separate tourist attraction. The Galleria Borghese houses a substantial part of the Borghese collection of paintings, sculpture and antiquities, begun by Cardinal Scipione Borghese, the nephew of Pope Paul V (reign 1605–1621).