Deprecated: mysql_connect(): The mysql extension is deprecated and will be removed in the future: use mysqli or PDO instead in /storage/content/94/2011594/stockholm360.net/public_html/db_connect.php on line 8 Tehran panorama / virtual tour gallery

Gallery: Tehran
Deprecated: mysql_connect(): The mysql extension is deprecated and will be removed in the future: use mysqli or PDO instead in /storage/content/94/2011594/stockholm360.net/public_html/db_connect.php on line 8

Currently 11 Panoramas in This Gallery

Tehran is the capital of Iran. With a population of around 8.3 million and surpassing 14 million in the wider metropolitan area, it is the countries's largest city and urban area, and one of the largest cities in Western Asia. The city is home to many historic mosques, churches, synagogues and Zoroastrian fire temples. Tehran is ranked 29th in the world by the population of its metropolitan area. Throughout history, the capital has been moved many times, and Tehran is the 32nd national capital of the country although it has been a capital city for about 220 years. In the early 18th century, Karim Khan Zand ordered a palace, and a government office to be built in the city, possibly to declare the city his capital, but later moved his government to Shiraz. Tehran finally became the capital of Iran in 1795, when the Qajar king Agha Mohammad Khan was crowned in the city. 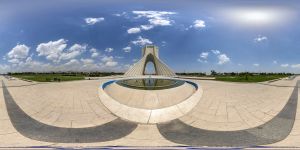 The Azadi Tower (Freedom Tower), previously known as the Shahyad, is the symbol of Tehran, the capital of Iran, and marks the west entrance to the city. It is part of the Azadi cultural complex, located in Tehran's Azadi Square in an area of some 50,000 m². There are several fountains around the base of the tower and a museum underground. 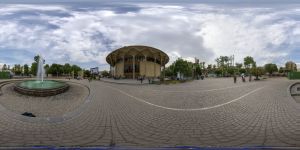 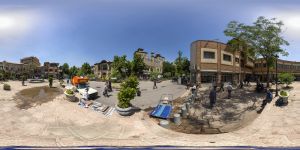 Shamsol Emareh Palace seen from Nasser Khosrow street. Shams-ol-Emareh (Edifice of the Sun) is the most stunning structures of the Golestan Palace. The idea of building a tall structure came to Nasser-ol-Din Shah from pictorial images of European buildings. The Monarch wanted a structure from which he could have panoramic views of the city. Construction on the Shams-ol-Emareh began in 1865 and was completed two years later. The building has two identical towers. The exterior views have multiple arches, intricate tile work and ornate windows. This building is a fusion of Persian and European architecture. 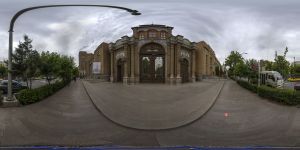 Sardar-e Bagh-e Melli (National Garden's Portal) or Meydan-e Mashgh was built in the Qajar period by direct order of Reza Shah Pahlavi. This portal was constructed as an entrance to the parade ground, owned by the army. After building the gate, the idea of creating the first public garden of Tehran within the area of the parade ground was suggested and carried out. Thereafter, the Portal of the Parade Ground was called (The Portal of Bagh Melli). The public garden did not remain that long and numerous buildings like Ministry of Foreign Affairs, the National Library and the Museum of Ancient Iran was built within the area but the name of the gate remained Portal of National Garden. 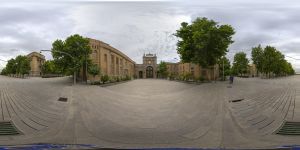 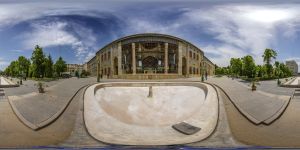 The Marble Throne (Takht-e marmar) in Golestan Palace is a 250 year old royal throne in Tehran, Iran. The throne was built from 1747 to 1751 for Fat'h Ali Shah Qajar. It was designed by Mirza Baba Shirazi Naqqash-Bashi and royal stonecutter Ostad Mohammad Ibrahim Isfahani.The throne's supports are carved in the shape of men, women, fairies, and demons.

The Royal Balcony of the Marble Throne is said to be built during the reign of Karim Khan Zand but it has been changed several times during the Qajar period. The twin stone columns of the balcony were transferred to Tehran by the order of Agha Mohammad Khan from Shiraz. 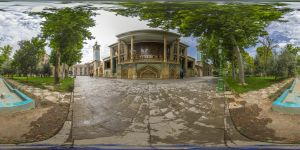 The building is flanked by two rooms known as goshvar (earrings). There is a central room which boasts the finest stained glass window in Golestan Palace. Outside, there are four wind towers of blue, yellow and black glazed tiles and a golden cupola. The wind towers are constructed to allow the cooling wind to move through the structure. 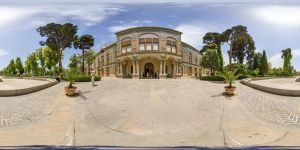 Info to be come soon. 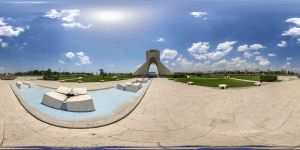 Meydan-e Azadi or former Shahyad . Built in 1971 in commemoration of the 2500th anniversary of the Persian Empire, this "Gateway into Iran" was named the Shahyad Tower, meaning "Kings' Memorial", but was dubbed Azadi (Freedom) after the Iranian Revolution of 1979. It is 50 meters (164 ft) tall and completely clad in cut marble. Built with white marble stone, there are eight thousand blocks of stone. The shape of each block was calculated by computer, and programmed to include all the instructions for the building's work. The inauguration took place on October 16, 1971. 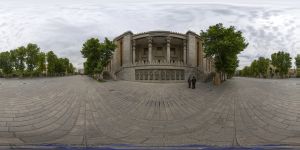 A Persepolis inspired modern building, the Ministry of Foreign Affairs in Tehran. A clear copy of the palaces in Persepolis with double ramped stair ways, portico in the center of the facade, high stone columns with double bullheaded capitals, stone reliefs of Persian guards with spear. A simpler and smaller version of how the Persepolis and Susa Apadana palaces could look like. The ministry is in Bagh-e Melli (Meydan-e Mashgh) in Tehran.