Deprecated: mysql_connect(): The mysql extension is deprecated and will be removed in the future: use mysqli or PDO instead in /storage/content/94/2011594/stockholm360.net/public_html/db_connect.php on line 8 Yazd panorama / virtual tour gallery

Gallery: Yazd
Deprecated: mysql_connect(): The mysql extension is deprecated and will be removed in the future: use mysqli or PDO instead in /storage/content/94/2011594/stockholm360.net/public_html/db_connect.php on line 8

Currently 15 Panoramas in This Gallery

Yazd, a city in central Iran and the capital of the Yazd province, is an ancient city dating back to the Sassanian Period (224-651 AD).

Because of generations of adaptations to its desert surroundings, Yazd is an architecturally unique city. To deal with the extremely hot summers, many old buildings in Yazd have magnificent windcatchers, and large underground areas. Yazd is also one of the largest cities built almost entirely out of adobe. Because of its climate, it has one of the largest networks of qanats in the world.

Yazd is a centre of Zoroastrian culture and its name has been derived from Yazdegerd I, a Sassanid ruler. There is a Tower of Silence on the outskirts, and the city itself has a Fire Temple, which holds a fire that has been kept alight continuously since 470 AD. 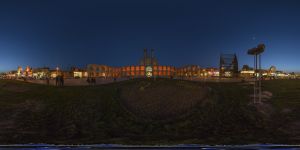 The city center and heart of the city of Yazd, Mir Chakhmagh or Mir Chaghmagh square with Takkieh Mir Chaghmagh construction, which is an entrance portal to the bazaar. This stunning three-story facade is one of the most recognizable and unusual buildings in Iran. Also the Mir Chakhmagh mosque is at this square and the Bazar-e Khan at the opposite side. There is also an Ab-anbar at this square, its with 5 wind catchers are visible from the square. 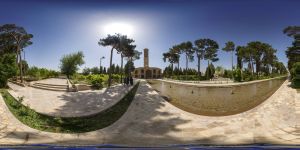 Bagh-e Dolatabad Garden, one of the nine gardens in Iran that together are protected and listed on World Heritage list as example of Persian Gardens. Built 1746 by Mohammad Taghi Khan or just the great Khan. A 60km long ghanat was built to irrigate this garden and some other historical sites like Bazar-e Khan, Madrese-ye Khan, Kravansera and Hamam-e Khan. 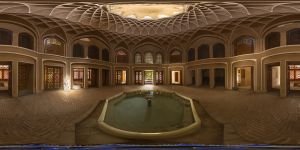 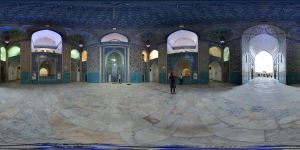 The 12th-century mosque is still in use today. It was first built under Ala'oddoleh Garshasb of the Al-e Bouyeh dynasty. The mosque was largely rebuilt between 1324 and 1365, and is one of the outstanding 14th century buildings of Iran.. 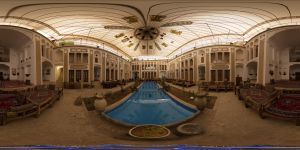 This traditional hotel (Vali Hotel) is a converted old mansion originally called the House of Hojjat. During years 2005-2007 the house was restored and renovated by Mr Ali-Asghar Dehghan and two other companions and converted to the current Hotel Vali. A traditional Yzdi style house which is delight to sit in or stay at. 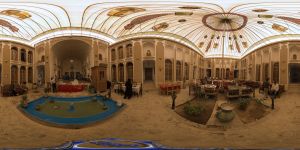 Another old mansion, originally named the Tehraniha House, which has been converted to an exquisite example of traditional hotel. Hotel Fahadan's sight is a delight. 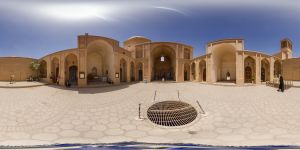 This monumental domed chamber, known locally as Zindan-i Iskandar (Alexanderâs Prison), is situated at the center of the old city of Yazd, in the historical Fahadan neighborhood. The Zindan-i Iskandar takes its name from the legend that Alexander built a castle in this region as a prison for captive princes but this has nothing to do with Alexander or prison. Historical sources suggest that the mausoleum and its adjoining structure are the remains of Madarasa Ziaiyya, a religious school in the second half of the thirteenth century (the Il-Khanid period). 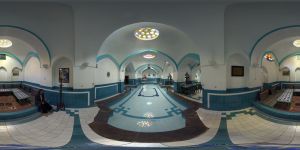 Deep in the heart of the old city, this restored underground hammam is one of the original historic restorations in Yazd and deserves its ongoing popularity. The interior is all tranquil pools, arched ceilings and fine tilework. 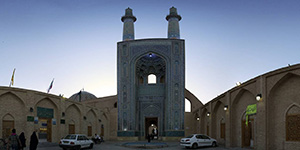 The mosque is a fine specimen of the Azari style of Persian architecture. The mosque is crowned by a pair of minarets, the highest in Iran, and the portal's facade is decorated from top to bottom in dazzling tile work, predominantly blue in colour. Within is a long arcaded courtyard where, behind a deep-set south-east iwan, is a sanctuary chamber (shabestan). This chamber, under a squat tiled dome, is exquisitely decorated with faience mosaic: its tall faience Mihrab, dated 1365, is one of the finest of its kind in existence. 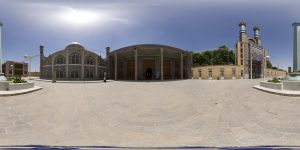 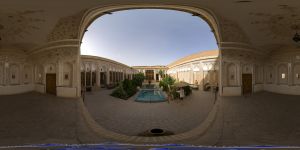 Yazd Water Museum , located in a restored mansion that happens to have a qanat or two underneath. The displays are clear and mostly in English. 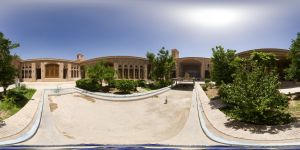 Lariha House, built by Mohammad Ebrahim Lari around 1883. Wooden entrance doors and a hashti (a place people would sitt an wait until permission to enter the house is given) Rooms all around the house for use during different seasons. Souther side has an iwan and wind catcher. A "sardab" cellar with a fountain is there and to access there you need to go 38 steps stairs downwards. Today it is used as a museum and national library and document archive. 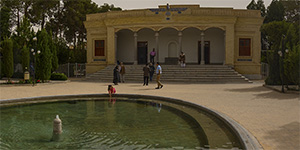 The Zoroastrian Fire Temple in Yazd, established in 1932, holds the highest grade of fire, the Atash Behram, "Fire of victory". It involves the gathering of 16 different "kinds of fire". The fire of this temple has been kept alight continuously since 470 AD. The temple consists of a garden and two buildings with relief decorations similar to the ones seen in Persepolis like Faravahar, cypres trees, etc. See more images from this temple in the blog (http://360stockholm.blogspot.se/2013/06/travel-diary-iran-2013-day-7.html) 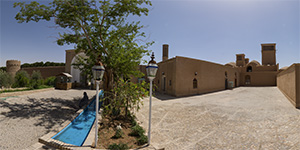 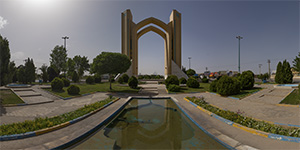 Quran Gate of Yazd at northern edge of the city at the road to Esfahan.