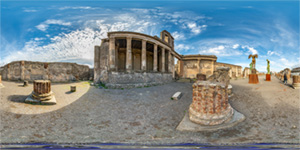 Pompeii's Basilica, with its extension of 1,500 square metres, was the most sumptuous building of the Forum, and its space was used to carry out business and for the administration of justice. It is accessed from the Forum through five entrances separated by tuff pillars; inside it is divided into three naves with two rows of brick columns with Ionic capitals. The Basilica is dated back to 130-120 BC and is one of the oldest examples of this type of building in the entire Roman world. 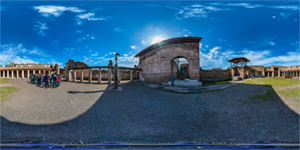 The main entrance on via dell'Abbondanza leads to a large courtyard. The pool is found to the left, whereas a colonnade is found to the right, which leads to the men's quarters, which are split into the dressing room, with the for cold baths, which leads to the section for medium temperature baths and then to the section for hot baths. The heating was guaranteed by a piping system in the walls and double floors that circulated the hot air coming from the furnaces and from mobile braziers. The women's quarters, close to the men's quarters, was split the same way in the apodyterium, tepidarium and calidarium. 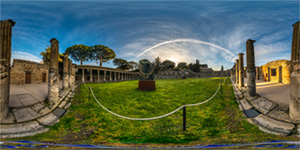 Behind the scene of the Large Theatre there is a large quadrangle surrounded by 74 Doric grey tuff columns of Nocera used as a foyer, an area where the spectators could stop during the intervals of the theatre shows. After the earthquake of 62 AD the building changed its function and became a barracks for gladiators, which resulted in certain parts of the building being reorganised. The most important rooms were those on the eastern side whereas the rooms upstairs may have been the apartments of the undertaker of the gladiators. 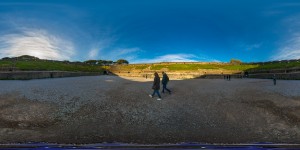 This amphitheatre is the oldest among those known from the Roman times. Built in 70 BC. It could hold up to 20,000 spectators not only from Pompeii but also from neighbouring towns. The building is located in a peripheral area so as to facilitate the movement of so many people. External staircases with two flights provide access to the upper steps and a downward corridor provides access to the lower steps. The arena is separated from the area intended for the spectators by a parapet which is decorated with frescos of gladiators. Roman Empire. 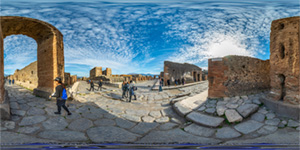 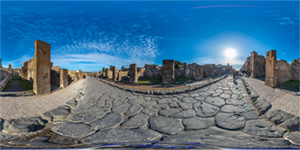 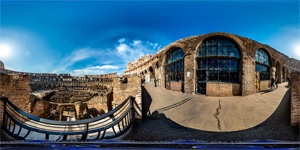 Although substantially ruined because of earthquakes and stone-robbers, the Colosseum is still an iconic symbol of Imperial Rome and is listed as one of the New 7 Wonders of the World. It is one of Rome's most popular tourist attractions and also has links to the Roman Catholic Church, as each Good Friday the Pope leads a torchlit "Way of the Cross" procession that starts in the area around the Colosseum. In 2018, it was the most popular tourist attraction in the world, with 7.4 million visitors.